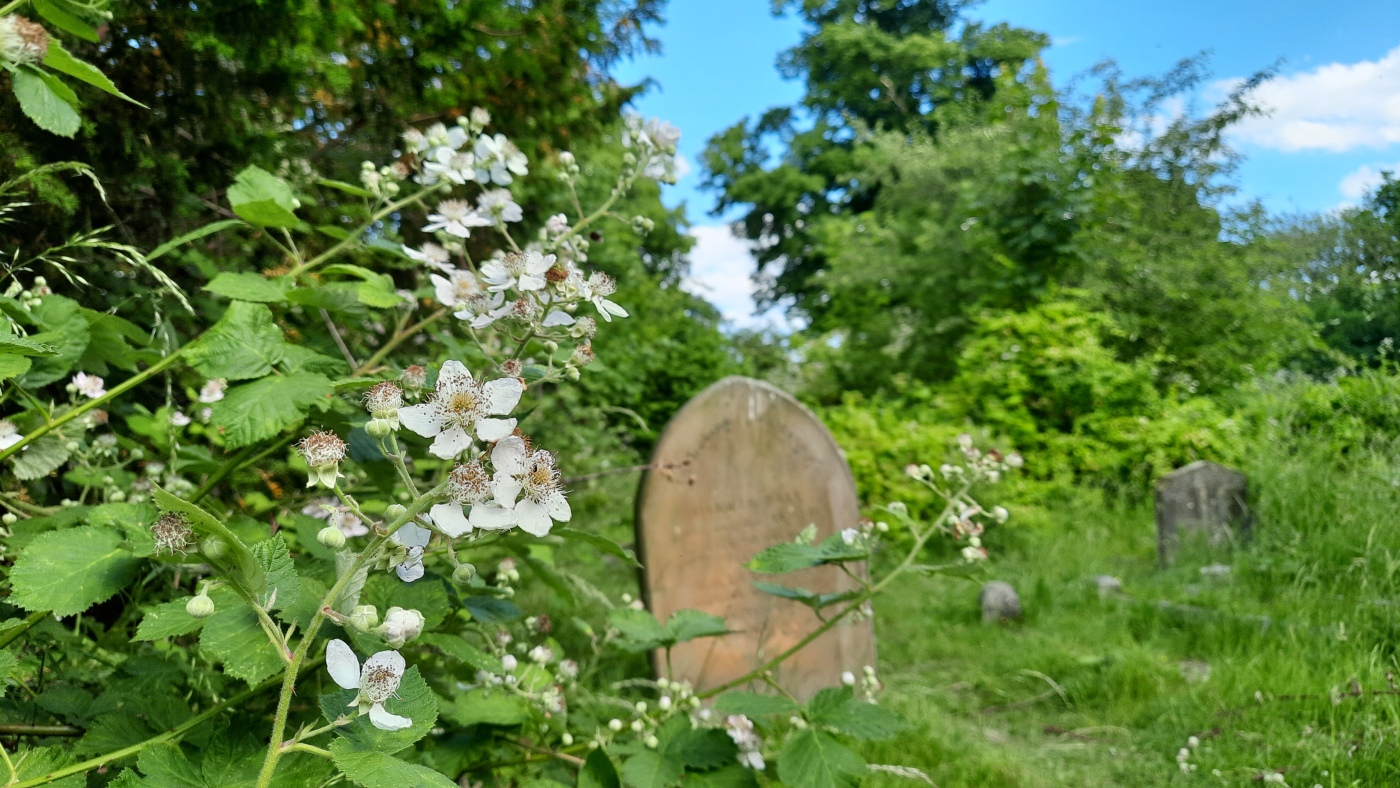 ‘Have you ever lost somebody before?’ he says to me. My nine-year-old cousin, with crossed legs and gel in his hair, has a solemn look on his face as he talks to me about grief. Little Sofia, otherwise known as Choppy, is less conscious of this weight when she asks me ‘why is people dead so important?’

Already most of the grandchildren are conscious of the euphemisms we use to cloak our grief, wrapping the starkness of death in palatability. ‘Dadabba is dead’ announces seven-year-old Hasan, before correcting himself. ‘No, passed away. You can’t say dead’.

But our grandfather, our Dadabba, was dead. And, on a cold November evening, it seemed like the objects in the house hadn’t yet learnt that he was gone. The books on the shelves. Medical notices in the kitchen. A red shoehorn beside the bed. Sugar tablets in the cupboard. His collection of baseball caps hanging up on hooks behind the door.

Muslim funerals happen quickly. The burial is arranged without delay; often with less than a day’s notice, people will drop everything to attend the funeral prayer, no matter where they are. Everybody suddenly pitches in, drawing the community together. My grandfather passed in the early hours of Thursday. His funeral was the next day.

Inside the mosque, Dadabba’s body is shrouded in white cotton. He resembles a wax copy of himself. My grandmother tells him that his dari, his white beard, looks good. That he can eat as much mithai as he wants, and that she won’t scold him for it. For the things she is sorry for. The arrival of the little ones breathes much-needed life into a sombre room. As grown-ups weep silently with the Quran in their laps, a rabble of eager hands and little legs crowd around. ‘What’s [the coffin] made of?’ ‘why’s his mouth open?’ ‘can I touch him?’ ‘why’s he cold?’

When visitors enter, my sister and I grip each other by the arms. Our family is stoic, except for Choppy, who is still doing pirouettes. The funeral prayer will begin shortly. When a child is born, the call to prayer (the adhaan) is often the first thing whispered into its ear, though no prayer follows it. When an adult dies, the funeral prayer is performed, but without a call to prayer. Some say it is as if life is as short as the space between adhaan and the prayer.

With one final look, my father folds the white shroud over Dadabba’s face and the lid of the coffin slides shut. With raised hands, he begins to supplicate out loud:

‘O Allah, forgive and have mercy upon him. Grant him safety and pardon him. Welcome him and expand his grave. Purify him of sin as a white robe is purified of dirt. Wash him with water, with ice, with snow…’

Of all the places in Cambridge Central Mosque, I’d never been to the mortuary before. But the body on the table was made of plastic. This was no death, but instead a workshop on funeral rites. It was small room filled with women – two young volunteers and participants of varying ages. Some, like myself, were novices with death and its rites. Others with years of practical experience interjected with tips which built on the instructions given on the ghusl, or the ritual washing of the deceased before burial. This is one of the rights of the deceased; it is a fard kifaya, a collective duty on the community to ensure those rights are fulfilled, that the body that enters the ground has been physically purified before its last resting place.

At all times, a sheet is draped over the body so as not to expose it; even in death, people have the right to dignity. Women are washed by women, and men by men, except for spouses. The process is meticulous. The body is washed, limb by limb, first with lukewarm water and then with soap. When it becomes necessary to remove part of the sheet, the volunteers will look away while washing, out of respect. Every movement is carefully and deliberately done. The head is never left unsupported and, when necessary, the body is turned gently on its side. Every touch is delicate, as if that person were only asleep. As if a touch could wake them.

The volunteers mention the physical realities of bodies which are sometimes soiled with blood or other impurities. But in the same way that we care for children who cannot look after themselves, rather than instinctive repulsion or fear, they encourage us to simply treat the body with tenderness and extra care. The need for discretion is emphasised: we don’t divulge details of the ghusl to anybody outside the room. Protect this person’s privacy and preserve the family’s lasting memory of them.

The final wash is often with rosewater or water scented with musk. The body is then wrapped in three to five swathes of simple white cloth, concealing any evidence of frailty, sickness or imperfection. A woman’s hair is gently combed and braided into three parts and adorned with the fifth piece of fabric, a scarf which frames the face. Fragrance is applied to the body both to preserve and beautify it, sometimes with incense or sandalwood paste. Chalky white camphor or liquid oud is sprinkled onto the shroud. It is a therapeutic experience; for many, direct participation in the rites of death provides a sense of materiality, as well as closure. It is a final physical interaction with a loved one, one last act of service.

I watch with solemn knowledge that eventually it will be my turn to wash the bodies of the women of my family. One day they will wash mine.

We buried Dadabba on a Friday, just before the sun set on a freezing November afternoon. There is blessing in the digging of the grave: family members and close friends are directly involved in the mechanics of both washing and burying loved ones. Placing the earth is not just a symbolic gesture, but an active and continuous communal effort, one which requires toiling, perspiring, and mounds of dirt. Those who turn up in shiny new shoes are ridiculed.

When I struggle to gather a handful of dirt, the soil clumping heavily in my hands, an uncle notices and silently handed me a shovel. Even the toddler twins, two mops of curly hair tottering by the graveside, throw tiny palmfuls of earth into it. There is not a black suit in sight: instead, the men turn up in jeans and shoes that they can get caked with soil. They pour their grief into the earth, armed with large shovels. My dad says that the mark of a good funeral is muddy trousers. Nothing is polished or prepared; there are no speeches or candles, only sweat on brows and soil under fingernails. Rather than devolving the job to professionals, these physical rituals mean that our family is intimately involved in process of saying goodbye to a loved one. We carry our own bodies, we wash them, we bury them. We remember him in death as we were with him in life, saying our goodbyes in plain clothes and muddy shoes. Eventually when the body is lowered into the grave, that visceral moment is inexplicably comforting, a reminder that we’ll join him shortly.

But this grave affair also has its fair share of ridiculous stories: a sanitary pad escapes my pocket at inopportune moments, and in the funeral hall Choppy takes it upon herself to smack the behinds of every man in her vicinity. Earlier when the children developed a chant that fluctuated between ‘we want Dadabba’ and ‘we love Dadabba’, my sister and I were concerned that this might resurface and disrupt things at the burial, so we developed a non-verbal signal that indicates ‘we miss Dadabba’: a tip of the imaginary cap, a fitting tribute. As his grave is filled with earth, we catch our cousin’s eye and tip our caps at each other.

That night, it howled with wind. My grandmother worried that her husband would be cold. As Dadi took down bits of paper from the kitchen noticeboard, medical letters and such, she remarked on its newfound starkness.  “Itna khali hogeya, Irfan”.  It’s so empty, Irfan.  The word khali hung in the air.

But the next morning, it snowed. Winter sunlight glinted off the ground, cracking through layers of grey cloud. The back garden was covered in white. Five-year-old Choppy looked out the window and observed: “Maybe that’s Dadabba’s beard”.

100 miles away from Dadabba’s grave, I find myself in Mill Road Cemetery. Now it is May and the graveyard is overflowing with bluebells and white elderflower. Ivy grows over stone gravestones and wind roars through the trees. The cemetery is thrumming with life, and I shake off various insects seeking to make their presence known. I take a voice note of the world around me; it feels like there’s nowhere with more birdsong in Cambridge. The crooning of the woodpigeons reminds me of my grandfather’s house in summer. Sparrows chirp and blackbirds whistle, while plump little robins hop between gravestones: their voices layer on top of each other until the air is thick with birdsong. I remember that the Quran describes paradise as a garden.

Less than 40 days after my Dadabba’s death, our family gathered for a second time that winter to mourn another loss. The same tight hugs. The same pangs as our elders came in and wept for their friends. My cousin and I sat by the feet of our grandmothers, both recently widowed, and watched how they held each other’s hands. I had a distinct image of us sitting in their places one day. But in the coldness of grief, they circulated old photos and told jokes, shared anecdotes and funny stories.

Some people say faith is a crutch to alleviate certain terrifying realities, or a cushion to soften the blow of grief. But real fear is the kind that cloaks itself in euphemisms, that lacks the language to deal with death. It is the fear of the physical corpse, and the paralysing inability to accept our temporality. It is the inability to remember death without horror. Like bodies hidden behind mortuary doors, a post-religious world often conceals death from the public eye. It discusses the dead in hushed tones, with awkward but sympathetic platitudes, but then fails to know how to proceed. It recoils at the corpse and the blood and the soil and regards death as distasteful. Perhaps to some it sounds unseemly, but as we made the funeral preparations, unrolled sheets of white paper, wrapped and sellotaped them around tables, we joked. Dadabba would have done the same. We busied our hands and our tongues. We laughed.

Faith lets us grieve in a different way: we lose the people we love, but we believe that death is temporary separation, a veil between this life and the next. It accepts and acknowledges painful emotions, but also inculcates resilience. We continue with sabr jameel, beautiful patience — an active, living patience, one of strength and dignity. We are not inconsolable. We are not afraid, nor will we grieve.

So I sit in the cemetery, and listen to the birds.